WHERE WE'VE BEEN:  THE HISTORY OF THE DIOCESE 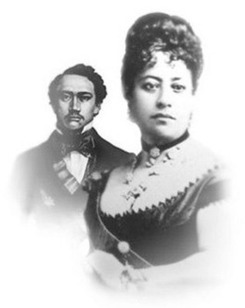 The Episcopal Church in Hawai'i began in 1862 when King Kamehameha IV and Queen Emma invited the Church of England to Hawai‘i. The King and Queen supported the Church's establishment throughout the islands with gifts of land, and by founding the Cathedral of St. Andrew in Honolulu. Queen Emma also founded Queen's Hospital (now Queen's Medical Center) and St. Andrew's Priory School for Girls in Honolulu.

The last Queen of Hawai'i, Queen Lili'uokalani, depended upon the spiritual support of the Episcopal Church during and following the overthrow of her reign in 1893.

The Missionary District of Honolulu originally included the Hawaiian Islands, as well as Guam, Okinawa, Taiwan and Kwajalein. It became the Diocese of Hawai'i in 1969 and now consists solely of the State of Hawai'i.

The Diocese is made up of people who are native to Hawai'i and from everywhere else in the world who worship according to the Book of Common Prayer, 1979. Even though we are Episcopalians, our friends and other members of our families may worship as Roman Catholics, in a variety of Protestant faiths, as well as Buddhists, Shintoists, Mormons, Jews, Hindus and in traditional Hawaiian and other native ways. We hold our cultural and religious variety in respect.

Worship in the Diocese fits the heritage, language and experience of the parishioners. Congregations in the Diocese have formed based on various ethnic groups, such as Hawaiian, Chinese, Filipino, Japanese and Korean. The Eucharist is celebrated regularly in Hawaiian, complete with Hawaiian language hymns. The Diocese celebrates annually, King Kamehameha IV and Queen Emma Day —the Feast of the Holy Sovereigns —on November 28.
The Episcopal Diocese of Hawai'i | 229 Queen Emma Square | Honolulu, HI  96813
(808) 536-7776 | Fax: (808) 538-7194 | www.episcopalhawaii.org
Contact Webmaster | © 2023 The Episcopal Church in Hawai'i. All Rights Reserved.